The BLTR – Benchmarking the Credit Profiles of Unrated Carriers

The story so far and a snapshot from the latest reports

Since late 2016 BIBA has made its BIBA Litmus Test Report (the “BLTR”) service available to BIBA members. The service covers unrated carriers that are requested for inclusion by BIBA members. The BLTR provides a set of benchmarked ratios on each covered insurer, along with other key data points and extensive explanatory and educational materials.

In the tables that follow we summarise the four capital ratio outcomes shown in each BLTR. Table 1 covers the five carriers that have been included within the BLTR service since 2016 that are now in liquidation. Table 2 covers, on an anonymised basis, the currently active BLTR carrier coverage. The summarised information in the tables focuses on how many of the four capital ratios are in the “weakest” ratio categories (category 5 and 5!) for each carrier. For extra context we also show details of each carrier’s Solvency II Ratio of Eligible own funds to SCR – the “Solvency Capital Requirement” (“SCR”) ratio  – which is also provided with the BLTR service.

A fuller description of the BLTR service and the ratio category calculations appears at the end of this report.

³ The “SCR” ratio is the  “Solvency Capital Requirement” ratio. This ratio, first published by carriers for the 2016 year as part of the Solvency II (“SII”) regulations, is also provided within the BLTR service. SCR ratios are a complex subject, please contact us at analytics@litmusanalysis.com if you would like to discuss this further

Other than for Prometheus Insurance Company Ltd. (renamed from Tradewise Insurance Co Ltd. on 31/12/2019), the carriers in Table 1 had capital ratio profiles in their final (pre-liquidation) BLTRs that looked weak relative to the UK market benchmarks, even though the last available data was some time before liquidation.

Prometheus appeared somewhat more positive as it did not have most of its capital ratios in the weakest category.  However, the company stopped publishing accounts after the 2015 financial year-end and so the data was old by the time it went into liquidation. 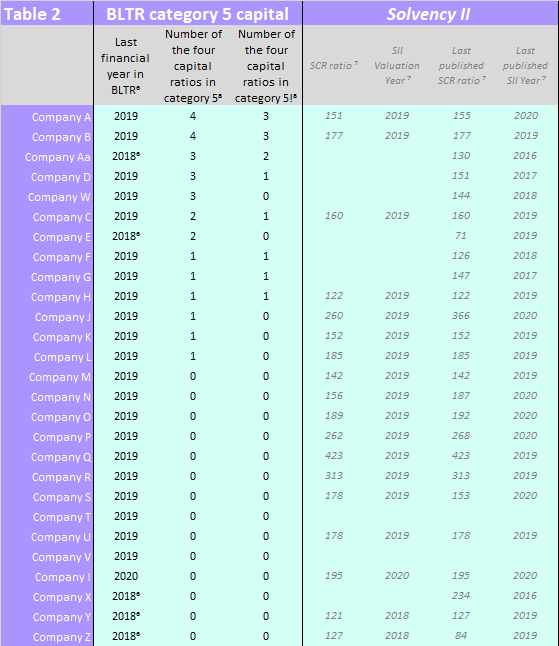 More details on the BLTR and the ratio category calculations

The analytical intellectual property and content of the BLTR service comes from Litmus Analysis while the underlying data used in the reports is from A.M. Best.

The core of each report is the comparison of credit profile ratios on each unrated carrier against a set of UK market benchmarks. These benchmarks (also calculated by Litmus from Best’s data) are derived from the financial data of 50 UK general insurers selected by Litmus via a rules-based process, and are updated annually once each new financial year of information is available within Best’s data set.

The benchmarks allow for the assignment of one of five categories to each ratio for a given insurer: with a category “1” indicating the strongest ratio levels and a category “5” indicating the weakest. The categories therefore highlight the apparent relative strength or weakness of a ratio (measured against the data of the set of 50 UK insurers used for the benchmark calculations).

The 1 and 5 categories can also have an exclamation mark suffix. These indicate either that a ratio is more than two times stronger (category 1) or weaker (category 5) than the benchmark for the ratio that delineates the category, or that the ratio is outside of the entire range of the set of 50 UK insurers from which the benchmarks are derived.

Best captures the data from each insurer’s report and accounts for the 50 insurers used to calculate the benchmarks and the unrated carriers covered in the BLTR service. Litmus then makes some data adjustments in calculating the benchmarked ratios in line with standard insurer credit analysis practice.  To provide BLTR users with the full background picture those ratios that can be impacted by the adjustments are also shown on an unadjusted “as reported” basis within each carrier’s BLTR.

Extensive further details on the topics covered in this report and their context are included in the service’s explanatory and educational materials available at the BLTR BIBA member site.

In addition, via BIBA, BIBA members are welcome to contact Litmus with any questions that they have on the BLTR service, including individual carrier BLTRs and/or the supporting educational and explanatory materials.